Today we had tickets to see the Space Shuttle Endeavor and the iMAX 3D Hubble Telescope movie with Sasha.  That would have been a memorable activity for him to write about to his students.  Then he was to move on and stay with Host Family #2

Since we already had the tickets, and neither Doc nor I had been to the exhibit, we decided to go anyhow.  As we drove down there, I asked the Angels for an appropriate person to use the extra ticket.  I couldn’t figure out how that would occur since most visitors attend along with several other persons. A single 10:15 a.m. shuttle tour with 12:30 iMAX show ticket was not likely to be easily matched up exactly with some other families’ plans.

Doc and I arrived early.  The ticket booth was not yet open. There was a nice looking guy standing around patiently waiting.  I asked him if he was needing a ticket?  He cautiously answered yes.  I asked him if he was alone and needing only one ticket?  He probably was a little unsure of my intentions at that point.  He confirmed he needed just one ticket.  I said, “Well if you are interested in a 10:15 tour with the 12:30 movie, this ticket is yours!”  He looked perplexed.  I told him we had a third person in our group who was unable to make it today.  He thanked me and offered to pay for the ticket.  I replied, “Pay It Forward. And when you do -- say it is for Sasha”.  Then I turned to walk away.

Since there were still 30 minutes until the museum opened, I turned back and introduced myself to Terry. Then I told him more about Sasha as well as the Project.  I asked Terry to enjoy his day on behalf of Sasha.  We saw Terry two other times throughout the day as we were touring. He said he was very much enjoying the shuttle exhibit.

The 3D iMAX Movie on the Hubble Telescope was breathtaking.  The numbers of galaxies and the distances (in light years) of the various new discoveries were mind boggling!  There were views of the Earth in the background as the astronauts were conducting Hubble repairs and upgrades.  At one point I almost laughed in thinking about our man-made “borders” and the way we think about other countries and cultures.  How very petty it all seems.  Sasha’s denied visa, our everyday activities (some which we consider crises), romantic affairs, financial affairs, and international affairs seem absolutely trivial when seen through the vastness of space.


Below is the flyer I FAXED to the US Moscow Embassy:


FATHER’s DAY -- the day Sasha was to have arrived at LAX.
How appropriate that would have been since Sasha assisted so many American men fulfill their dreams of becoming fathers.

There were many adopted Russian children who were anxious to meet the man who helped them become American citizens.  But alas, the U.S. Consulate will not allow Sasha to visit the children. The children are heartbroken and wondering WHY has this been forbidden?

Sasha is not wealthy enough to meet the visitation criteria.  Sasha does not own sufficient property or have significant savings.  (Note:  All of his expenses while in this country were to be paid by the numerous hosting families).

Sasha’s “wealth” is in the unselfish assistance he provided to American families. His “riches” are the fulfillment of people’s dreams. His “treasures” are the dozens and dozens of Russian children he helped place into loving homes versus having them continue to live in orphanages and government facilities.  Those assets can not be shown on a bank statement.

Sasha has lived to create bridges between our two countries and has served as an ambassador of goodwill.  The U.S. Consulate should be honoring this man versus rejecting him!

There are readers in 8 countries who have been following Sasha's Journey to this point.  It is a shame that in just a few moments, one man had the power to shut down this worthwhile program.  He destroyed summer hosting and travel plans of the 12 adopting families, meetings scheduled with educators and researchers, visitation plans of dozens of other good citizens, interview plans of media persons, and the joy which was being shared by readers internationally.

Where is the logic or value in such a decision? 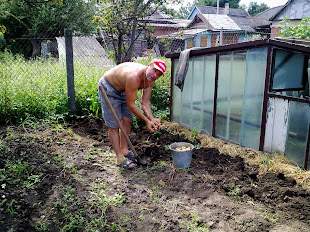 Penny Palace
For the past few years I have been fulfilling a life-long dream of building my own house. What began as a construction project, became a journey of Faith and Miracles. Penny Finding was the tool used to build the house. With the construction of the Penny Palace completed, it was time for a new dream... Hence, The Sasha Project.